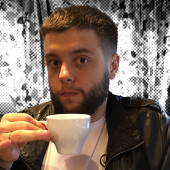 True Internet developer since 2008. The character is consistent. He has good relations with his workmates. Impeccably executes code review. Merciless to bugs in production. A good sportsman: the company's champion in typing speed using the ten-finger blind method. Married, was involved in backend development in 2011-2014, since then he hasn't been noticed in the relations defaming him. Adheres to reactive views. Marked with certificates and thanks.