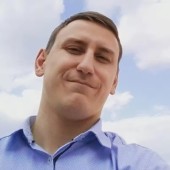 A Software Engineer and enthusiast, capable to create products from idea to production. Vladimir's programming experience began from the last school years when he finished Computer Science classes. Then he went to the University and dive deep into the science of how semiconductors grow. And from 2011 Vladimir has been working as a software engineer including his master's degree project, where he used programming skills to create complex computation and analysis tools. He also worked in games, social and event industries. Was part of an incredible team of Interactive Lab in Moscow, helped friends from IvanRast in Saint-Petersburg to create digital experiences, CMS for a museum, and interactive presentations. In 2016 Vladimir had invited one of the gaming companies in Prague and later joined one of the best IT sports companies DELTATRE as a Senior Software Engineer.